My friend Mallory sent me this video in an email. It brought tears to my eyes because I was laughing so hard. Simply when he flashes the yellow card.

Happy Friday!
Posted by Emily at 10:11 AM No comments:

I think Morgan says it best, "me and Emily are queens of the linger longer. First to the food, first out the door." Yesterday after church was a linger longer or as they call it in Amy's ward, "a cookie and a lookie," so disturbing. The ward meets in the gymnasium and you're suppose to eat and mingle with everyone. We are pro's at the eating, mingling not so much. The last time we went to one of these things all they had was granola bars, orange slices, and capri suns... "What are we at soccer practice?!" - Anna Campbell. We enter the gym and see that they have boxes of cereals, milk, chocolate milk, orange juice, monkey bread, and a bowl full of Valentine's candy for us. Morgan and I stake out the closest table to the food. Our method the closer you are to the food, equals first in line as soon as they say Amen. Before they say the prayer on the food our roommate informs us that she needs to be home soon to go to dinner at her boyfriend's parents. She asked if we could dine and dash, our response, "No problem!" Of course we are first in line, we had been eyeing the trix cereal beforehand but then once to the table I noticed there was reese's cups cereal, "Morgan there's reese's cereal!" "Grab it!" We ate that cereal in record time and at one point I found Morgan stuffing my dress pockets with candy. On our way out the door I turn to Morgan and tell her that I could really use a glass of orange juice and if she thinks it's at all possible for me to make it back in the crowd surrounding the food. She turned to me and said, "It's risky." I had very little time but I came out with flying colors and my glass of orange juice raised in the air. Anna saw me with it and said, "Hey I want one! How did you get that?" I told her you got to be sneaky. As I'm drinking my orange juice Morgan asks me if she can have some. If there is anything I have learned with Morgan and drinks and food when asking if she can have "some" it means practically the whole thing. My new method leave the last gulp or bite for her. I tested it out and gave her the last bit my orange juice. Her response when seeing it, "Oh new method? I assume the rest is for me?" "Yes Morgan... Yes it is." She took it beautifully.
Posted by Emily at 10:23 AM 1 comment:

"I'm the next Nicki Minaj!"

Listen hear if you are not well aware of Sophia Grace and Rosie by now you must live under a rock. Watch Ellen for the love! Seriously though if you don't know who they are hit up YouTube and watch all the clips of them on Ellen. We are in LOVE with these two girls! WE can not can not can not get enough of them! Today they were on Ellen performing for like the fifth time and out of no where Sophia launches into an incredible original rap about her and Rosie.
Watch and be amazed.
Oh and by the way they are cousins, go figure.
I want to meet them even more then I want to meet Ellen.
Posted by Morgan at 11:14 AM 1 comment:

Need a good laugh? Well then you have come to the right place. Let us dazzle you 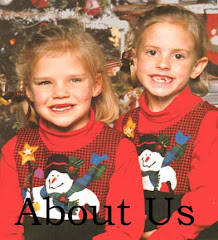 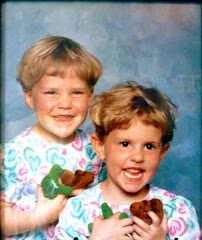